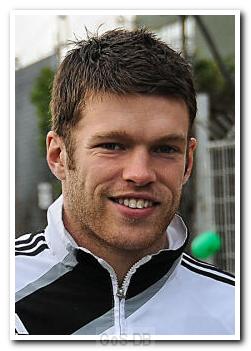 Mackie began his career at non-league Leatherhead before moving to Wimbledon and then Exeter City in the summer of 2005, having been released by the newly re-named MK Dons. He was loaned to Sutton United during his first season at St James' Park, and after returning to Exeter went on to score 20 goals in nearly 100 appearances before his move to Argyle for a reported fee of £145,000 in January 2008.

Mackie made a sensational start to his Home Park career, scoring with his first touch, 15 seconds after coming on as a 75th minute substitute against Barnsley, and then again nine minutes later. Signed as a striker, he was often used as a wide midfielder and soon became an integral part of the squad. His direct, attacking style unsettled defenders but did not always produce the end product he seemed to be capable of. Virtually ever-present in the 2009-10 season, he finished as the club's top scorer and, following relegation, moved to Queens Park Rangers for a fee thought to be around £500,000.

A firm fans favourite at Loftus Road, Mackie scored 18 goals in 94 appearances for Rangers but also endured nine months on the sidelines after breaking his leg in January 2011, which forced him to celebrate Rangers' promotion to the Premier League from the stands. One of his most notable strikes for Rangers came on the last day of the following season: the title-decider against Manchester City to put his side 2-1 up at the City of Manchester Stadium, until the memorable last-minute brace sealed the title for City in dramatic fashion. Whilst at Loftus Road and courtesy of a Kilmarnock-born grandmother, Mackie was capped eight times by Scotland, scoring twice.

In May 2012 Mackie penned a one-year contract extension at Loftus Road to commit himself to the club until 2015, but the following summer he moved to Nottingham Forest for a reported £1 million fee on a three-year deal. He was a near ever-present for Forest in the 2013-14 campaign, but at the start of the following season he joined Reading on a season-long loan.

Greens on Screen is run as a service to fellow supporters, in all good faith, without commercial or private gain.  I have no wish to abuse copyright regulations and apologise unreservedly if this occurs. If you own any of the material used on this site, and object to its inclusion, please get in touch using the 'Contact Us' button at the top of each page. Search facility powered by JRank Search Engine. Hover facility courtesy of Milonic. UK time at page load: 27 January 2022, 12:48.