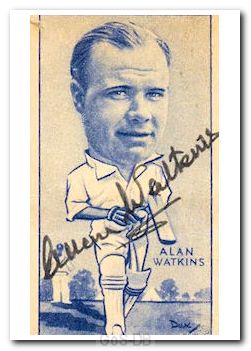 Born in Usk in Monmouthshire, Watkins will be forever remembered for his remarkable cricketing prowess rather than his footballing achievements. With war looming, he made his County debut for Glamorgan three weeks after his 17th birthday, and had also been on Cardiff City's books in his youth. During the Second World War he served with the Royal Navy and was obsessive about sport, having also played rugby union for Pontypool. It was whilst he was stationed in Devon that Jack Tresadern signed him as a winger, but his spell at Home Park was brief and somewhat bitter when footballing and cricketing demands conflicted, with Argyle clearly keen that he pursued the former. Indeed his first century for Glamorgan, vs. Surrey at the Arms Park in Cardiff in 1946 only came after Tresadern had agreed to release him from training. He made just five appearances in green, scoring once (in his final game, a home defeat by Southampton in March 1947) before matters came to the fore.

Watkins' desire to continue his cricketing career led to a move back to Cardiff City, which enabled him to continue playing for Glamorgan, where he had developed into a talented left-handed batsman and a left-arm, medium-fast bowler. However, he never made a Football League appearance for Cardiff as cartilage trouble forced his retirement from football and cemented his devotion to cricket. In the summer of 1947 he hit four centuries for Glamorgan and featured brilliantly at short-leg, resulting in his first England Test call, where he famously found himself in prime position in the field to face Sir Donald Bradman's final career ball.

He went on to help Glamorgan to their first County Championship in 1948 and was then selected for England's tours of South Africa (1948/49) and India (1951/52). In all he played in 15 Tests and scored two centuries for his country, and with the first, became the first Glamorgan player to do so for England. Domestically he achieved the much feted 1,000 runs/100 wickets double in both 1954 and 1955, and continued to play for Glamorgan until he was 39. His benefit match in 1955 raised £4,750, which he invested in a dairy shop back in his native Usk and in his children's education. Known for his chain-smoking nervousness, for which he also took pills, Watkins was troubled by asthma in his last few seasons and played his last match for Glamorgan in 1961. His final County statistics were truly impressive: he played in 484 first-class matches in which he scored 20,361 runs at an average of 30.57, including 32 centuries and 108 half centuries. He took 833 wickets at an average of 24.48, along with 461 catches  many of them quite brilliant.

After retiring from the game he worked briefly as a Prison Officer before taking up a position as a cricket coach. He was made a Life Member of the MCC in 1991 and his biography 'Allan Watkins: A True All Rounder' was published by Douglas Miller in July 2007. Watkins died in Kidderminster on 3rd August 2011 at the age of 89, after a short illness. The cricket world united to mourn his passing, with former commentator John Arlott having once described Allan Watkins as "the best close-to-the-wicket fielder in the world".

Greens on Screen is run as a service to fellow supporters, in all good faith, without commercial or private gain.  I have no wish to abuse copyright regulations and apologise unreservedly if this occurs. If you own any of the material used on this site, and object to its inclusion, please get in touch using the 'Contact Us' button at the top of each page. Search facility powered by JRank Search Engine. Hover facility courtesy of Milonic. UK time at page load: 17 May 2022, 18:22.