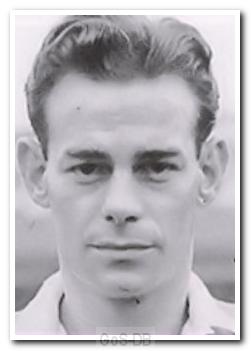 Taylor was one of 27 in the guest category. At just 5' 4" he was a diminutive young Newcastle United protégé when he guested for Argyle as Able Seaman Taylor, who had played for the Portsmouth Navy side that defeated Devonport in an inter-port game a few days before his Argyle debut. Few could have imagined the career he would go on to have.

The Sunderland-born inside-forward signed on at St James' Park from Hylton Colliery in 1942, although was actually a naval submariner at the time rather than a colliery worker. Returning to St James Park when the full League programme resumed, he spent four years at the club, appearing 107 times and scoring 19 goals. After playing in Newcastle United's FA Cup Final win over Blackpool in 1951, in which his back-heel set up one of Jackie Milburn's two goals, it is reported that Stanley Matthews told his manager, Joe Smith, that he would like to see the opposition's inside-right play for Blackpool. In October that year, Taylor duly signed for Blackpool and went on to form a well-established right-sided partnership with Matthews, making 217 appearances and scoring 53 times. Having played for Blackpool in the famous 1953 'Matthews' FA Cup Final win over Bolton Wanderers, in November that year Walter Winterbottom decided to try Blackpool's right-sided link-play for England, and Matthews and Taylor lined up against Hungary at Wembley. However, England lost 3-6 and it turned out to be his only appearance for the Three Lions.

In 1958 he signed for Manchester United and helped the club to the FA Cup Final, although he did not play in the final, a 2-1 defeat by Aston Villa shortly after the Munich Disaster. Having played 22 times and scored twice for United, he moved to his hometown Sunderland for £6,000 in December 1958, where he played 68 times, scoring 11 goals in a three-year stay. After leaving Roker Park he wound down his career with spells at Altrincham and then Derry in Ireland before a brief spell managing and coaching New Zealand side New Brighton, whilst also playing for Auckland club East Coast Bays. Managing and playing in New Zealand was his last involvement in football before he later returned to the UK and retired.

Greens on Screen is run as a service to fellow supporters, in all good faith, without commercial or private gain.  I have no wish to abuse copyright regulations and apologise unreservedly if this occurs. If you own any of the material used on this site, and object to its inclusion, please get in touch using the 'Contact Us' button at the top of each page. Search facility powered by JRank Search Engine. Hover facility courtesy of Milonic. UK time at page load: 16 May 2022, 09:16.