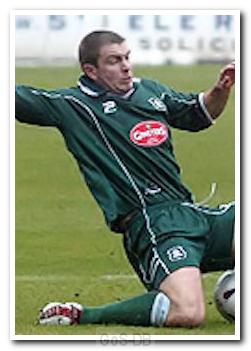 Smith was a journeyman midfielder who spent a short period on loan at Argyle from Sheffield United, with a view to a permanent move. However, he did not do enough in his five games to be offered a contract. Early in his career he played for Wycombe Wanderers, Reading and Hearts before a move to Livingston. After a loan spell with Clydebank he was released and signed for Sheffield United, spending some time on loan to Halifax Town as well as Argyle.

Following his time at Home Park, Smith joined Swindon Town before a move to Bristol City and a loan spell with Walsall. After briefly returning to Scotland with Dundee United, he had a spell in Finland with HJK Helsinki. Smith also went on to play for Carlisle United, Droylsden, North Queensland Fury in Australia and Ross County.

Greens on Screen is run as a service to fellow supporters, in all good faith, without commercial or private gain.  I have no wish to abuse copyright regulations and apologise unreservedly if this occurs. If you own any of the material used on this site, and object to its inclusion, please get in touch using the 'Contact Us' button at the top of each page. Search facility powered by JRank Search Engine. Hover facility courtesy of Milonic. UK time at page load: 17 May 2021, 05:46.