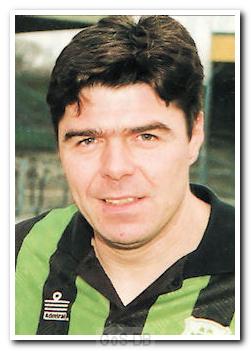 Coventry City's Mick Quinn was winding down a prolific career at the top when he received the call to make the temporary move to Plymouth; several calls in fact. Peter Shilton was desperately seeking a striker to fire his struggling side away from relegation danger in late autumn 1994, and Quinn was the man he pursued as relentlessly as the former Portsmouth and Newcastle striker had pursued goals.

On returning home from the pub one evening, Quinn again found Shilton on the end of his phone, and finally agreed to sign for the Pilgrims on a one-month loan deal. A fee was agreed to take the then 32-year-old to Devon on a permanent basis, but the move turned out to be a huge disappointment for all parties, on and off the field. Despite a thrilling debut in which the veteran striker inspired his faltering team-mates to a 4-1 home win over Wrexham, Quinn failed to find the net in his three-match spell at the club. Furthermore, he later described Home Park as 'not a happy place to be', in reference to the seemingly endless war of words between Shilton and Dan McCauley. He returned to Coventry and went on to enjoy success as a radio pundit and racehorse trainer.

Greens on Screen is run as a service to fellow supporters, in all good faith, without commercial or private gain.  I have no wish to abuse copyright regulations and apologise unreservedly if this occurs. If you own any of the material used on this site, and object to its inclusion, please get in touch using the 'Contact Us' button at the top of each page. Search facility powered by JRank Search Engine. Hover facility courtesy of Milonic. UK time at page load: 03 August 2021, 18:21.