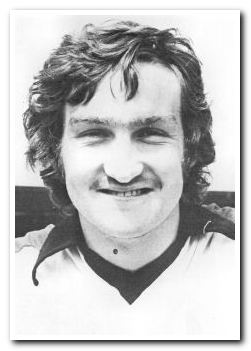 Peddelty was born in Bishop Auckland and served his apprenticeship with Ipswich Town, where he was highly regarded and made his League debut as a 17-year-old in a 2-1 defeat at Anfield. Signing professional terms at the start of 1973, the central-defender went on to play 44 times in a spell spanning five seasons at Portman Road and gain England youth international honours. He then arrived at Home Park with Terry Austin, as makeweights in the deal that took Paul Mariner to East Anglia. He soon settled into the Argyle defence, playing solidly as a near ever-present for the remainder of the 1976-77 season and also netting his only goal for the club. However, having already suffered a fractured skull playing for Ipswich Town, a further head injury early in his second season with Argyle meant the club sought specialist advice. He was informed that it would be dangerous for him to continue playing at the highest level due to cranial problems and issues with his neck and discs. After sadly having to retire from the game at just 22 years old, he later embarked on a 28-year career with Suffolk Police. Retiring from the force in 2010, it seems his career-changing injuries might still impact his life; he made headlines in Suffolk after collapsing at Bury St Edmonds golf course due to a subarachnoid haemorrhage, but happily he recovered to full health.

Greens on Screen is run as a service to fellow supporters, in all good faith, without commercial or private gain.  I have no wish to abuse copyright regulations and apologise unreservedly if this occurs. If you own any of the material used on this site, and object to its inclusion, please get in touch using the 'Contact Us' button at the top of each page. Search facility powered by JRank Search Engine. Hover facility courtesy of Milonic. UK time at page load: 27 January 2022, 11:39.