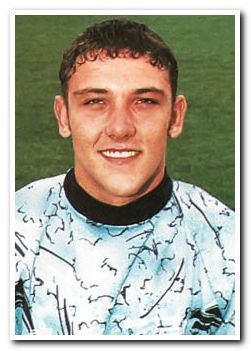 Came from: Cheltenham   Went to: Gillingham

If the life of an Argyle player was to be turned into a film, the overwhelming candidate would surely be goalkeeper Alan Nicholls. And what a watch it would be. Nicholls rose spectacularly from the very depths of non-league football to reach the heady heights of international football in a startlingly short period of time. But with the world at his feet, he sabotaged his career with a potent mix of hubris and hedonism, in a turbulent tale that ended in the most tragic of circumstances.

Born in Birmingham in 1973, Nicholls played at left-back for his school team, but it was between the posts where he attracted the attention of local scouts. Following spells with West Brom and Aston Villa, the then 15-year-old eventually ended up at Wolves. His buoyant personality and outstanding form for the reserves saw manager Graham Turner consider him for a first team call-up at the tender age of 16. But Nicholls was caught up in a ticket-touting scam involving some of his young team-mates, and he was booted out of Molineux in 1991, with Wolves holding onto his League registration as a form of lingering punishment. Forced to start from scratch, Nicholls ended up at Cheltenham Town via minnows Cradley Heath and, eventually, back in League football when Peter Shilton took him to Home Park in the summer of 1993.

Signed as third-choice keeper behind Ray Newland and Shilton himself, Nicholls forced himself into first team reckoning by sheer will alone, and he made his debut in a League Cup tie against Birmingham City at the age of just 20. A man-of-the-match display surprised everyone inside Home Park on that fair August evening. Equally surprised were the members of Argyle's back four, who found themselves on the receiving end of a verbal battering from the inexperienced debutant. Within weeks, Nicholls had become the club's undisputed No.1.

Gravity-defying agility coupled with lightning reflexes made Nicholls a formidable figure between Argyle's posts, and the young Brummie was one of the outstanding performers in a team packed full of them in the playoff season of 1993-94. A call-up to the England Under-21 squad for the Toulon Tournament of 1994 capped an extraordinary year for the club's brightest prospect in years. But following a disastrous international debut in a 3-0 defeat against France, Nicholls returned to Plymouth for pre-season overweight, injured and, according to many of his team-mates, more cocksure than ever.

Injuries restricted him to just 27 appearances in the woeful relegation season of 1994-95, but it was his behaviour off the pitch that eventually led to his exit from Home Park. A drink-driving incident was the final straw for new Argyle boss Neil Warnock, who showed Nicholls the door in August 1995. An unsuccessful trial at Gillingham led to Nicholls answering a call from Stalybridge Celtic, who were without a keeper for a Conference match at Dover. After impressing in a 3-1 win for Celtic in Kent, Nicholls opted to travel to Scunthorpe for a night out with Dover midfielder Scott Lindsey. En route, Nicholls decided to keep Scott's brother Matt company on the back of his motorbike. Matt lost control of the bike near Peterborough, and he and Alan were both killed instantly. Alan is buried in the grounds of St Paul's Church in Blackheath, a picture of him making a save in full Argyle kit engraved on his headstone.

Greens on Screen is run as a service to fellow supporters, in all good faith, without commercial or private gain.  I have no wish to abuse copyright regulations and apologise unreservedly if this occurs. If you own any of the material used on this site, and object to its inclusion, please get in touch using the 'Contact Us' button at the top of each page. Search facility powered by JRank Search Engine. Hover facility courtesy of Milonic. UK time at page load: 02 December 2021, 03:22.