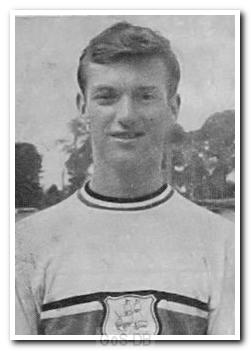 Nicholas joined Argyle as an apprentice in 1964, but made just three appearances in his two years with the club. His debut came in the League Cup semi-final first-leg against Leicester City, due to the Argyle squad being decimated by injury. Early in the game Nicholas beat Gordon Banks but the goal was disallowed. This was to be the high point of his Argyle career, and after a brief loan spell at Crewe Alexandra in 1966, he left the club. He had a spell with Torquay United, but did not play for the first team, and also played for his hometown club Dartmouth.

Greens on Screen is run as a service to fellow supporters, in all good faith, without commercial or private gain.  I have no wish to abuse copyright regulations and apologise unreservedly if this occurs. If you own any of the material used on this site, and object to its inclusion, please get in touch using the 'Contact Us' button at the top of each page. Search facility powered by JRank Search Engine. Hover facility courtesy of Milonic. UK time at page load: 27 January 2022, 11:21.