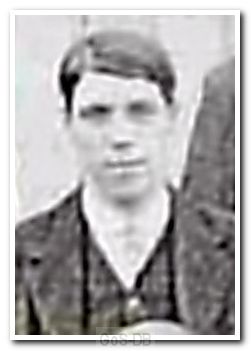 Originally from Quarter, south-west of Motherwell in South Lanarkshire, McLaren was an 18-year-old forward who joined Argyle from junior side Burnbank Athletic in October 1912. Nicknamed 'Carrie', he spent 13 years as a footballer.

As a boy he had played for Larkhall Avondale, Larkhall Thistle and Quarter Huttonback. After making the move south from Burnbank, he made just two appearances for the first team whilst at Home Park, but was described by the club handbook as a "stalwart" for the reserves.

After the First World War and back north of the border, McLaren joined Royal Albert and it was his form with them that encouraged Hamilton Academical to sign him in September 1919. Shortly after making his Accies' debut he was loaned back to Royal Albert for a cup match and when he returned to Douglas Park he found himself in and out of the team and it was no surprise when he later returned to Royal Albert permanently, having spent 1920 with Armadale. In total he had made 13 appearances and scored twice for Hamilton.

Once his playing career was over he worked at the Allanton Colliery at Ferniegair. His son, Andy (b.1922) followed in this father's footsteps by playing for the junior sides in Larkhall, Hamilton Academical and Royal Albert and also had an extensive career south of the border with Carlisle, Blackburn, Liverpool, Bristol City, Burnley, Sheffield United, Barrow, Bradford Park Avenue, Southport, Rochdale and Fleetwood. He also won four Scotland caps in 1947, scoring four goals.

Not long before the outbreak of the Second World War, George was present at a Scottish Juvenile Cup match involving Larkhall Gardeners - most likely watching 16-year-old Andy, who played for them at that time. The Gardeners were two men short and George was coaxed into playing, reportedly showing many of his old touches before running out of steam.

Footnote: written with help from www.acciesmemorybank.co.uk.

Reference George McLaren, he joined us from Burnbank Athletic before leaving us to play for Hamilton. Source is a site called "acciesmemorybank".

Greens on Screen is run as a service to fellow supporters, in all good faith, without commercial or private gain.  I have no wish to abuse copyright regulations and apologise unreservedly if this occurs. If you own any of the material used on this site, and object to its inclusion, please get in touch using the 'Contact Us' button at the top of each page. Search facility powered by JRank Search Engine. Hover facility courtesy of Milonic. UK time at page load: 22 May 2022, 12:56.