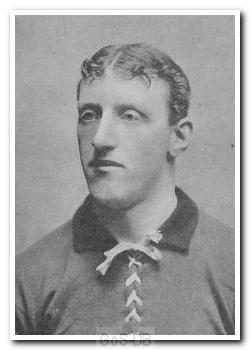 Came from: Fulham   Went to: Portsmouth

McIntyre was born in Newcastle in 1881 and began his career with local side Allendale Park. In 1902 he joined Newcastle United but made just six appearances for the club over the next three years, scoring once. In 1905 he moved on to Fulham and it was from there that he signed for Argyle in the summer of 1907.

A versatile player who could play on the left or right side of midfield, he was virtually ever-present over his first 18 months at Argyle, primarily at left-half, and was praised in the club handbook as being "a really classy half-back who possesses great speed and feeds with splendid judgement". McIntyre is probably best remembered though, for an incident which took place in February 1909.

After Argyle's defeat at Derby in the FA Cup four members of staff joined supporters on the train for the journey back to Plymouth, including McIntyre, Tich Horne and trainer Nicholas Wallis. McIntyre got into an argument with Wallis over a game of cards and struck him on the jaw. Punches were then exchanged between McIntyre and Horne, who was hit over the head by a water bottle. When the train eventually arrived at Millbay, Wallis was still unconscious but he was attended to and his jaw was wired up. The directors held an enquiry and suspended McIntyre for the rest of the season, effectively ending his Home Park career, and he returned to Newcastle to see out his suspension.

Sadly, Wallis did not respond to treatment and his condition worsened. He died of septic pneumonia on the March 25th, 1909. The next day a warrant was issued for McIntyre's arrest and he was charged with manslaughter. He was remanded on bail to appear at Devon Assizes on June 30th, 1909 but the case lasted just one day, McIntyre being found not guilty. The court was fully satisfied that all involved were perfectly sober and it was considered that McIntyre did not premeditate the incident, it happened in a fit of temper, and so he was exonerated.

After the court case was concluded 'Teddy' signed for Portsmouth before returning to the north-east with West Stanley. He played much of the latter part of his career at centre-forward and in February 1911 joined Hartlepools United, where he scored 12 goals in 12 games during the second half of the season. In the summer of 1911 he signed for South Shields and also went on to play for South Shields Parkside and Gateshead.

See Chapter 11 of GoS's History of Argyle for more on the manslaughter story.

Greens on Screen is run as a service to fellow supporters, in all good faith, without commercial or private gain.  I have no wish to abuse copyright regulations and apologise unreservedly if this occurs. If you own any of the material used on this site, and object to its inclusion, please get in touch using the 'Contact Us' button at the top of each page. Search facility powered by JRank Search Engine. Hover facility courtesy of Milonic. UK time at page load: 16 May 2022, 09:47.