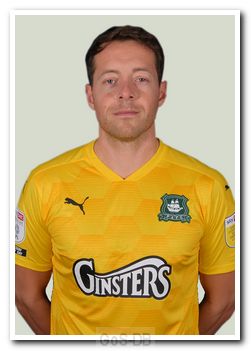 1. Came from: Trainee   Went to: Released

A product of Argyle's youth set up, McCormick made his first team debut in 2000-01, becoming the back-up for Romain Larrieu. Following an injury to Larrieu, he took over as number one and performed superbly throughout the Division Two title-winning season and was named the club's young player of the year, an award he won again the following year. The two 'keepers shared duties over the next four seasons, with McCormick also having a brief spell on loan at Boston United. His contract was cancelled in July 2008 after he admitted causing a fatal car crash, for which he was subsequently convicted and sent to prison for seven years and four months.

Released in June 2012 to some media furore, he spent a short period with Swindon Town, who decided against offering him terms. He then began to rebuild his career by signing for Conference South side Truro City, for whom he played 10 matches, and was then given an opportunity to return to the Football League when an injury crisis left Oxford United looking for a goalkeeper. After 15 appearances for United, which included a clean sheet in their 1-0 win at Home Park in February 2013, he was released at the end of the season.

In May 2013 McCormick returned to Home Park, some five years after he left, signing a one year contract to compete for a first team place with Jake Cole. When he re-joined the club, chairman James Brent publically stated, "Although Luke made a dreadful mistake with unthinkable consequences, he has served his time and is totally remorseful. While I respect others who have alternative views, from a moral standpoint, the board and I think Luke is entitled to rehabilitation." The club also announced that McCormick would donate a 'significant sum' to a local children's charity and donate time to support it during his time back at Home Park.

After closely vying with Cole during the 2013 pre-season friendlies, John Sheridan announced McCormick as the goalkeeper for the opening fixture of the new campaign, and after excellent form, he retained the jersey for league fixtures (with Cole selected for cup games) until a fractured finger ended his season the following February. However, with a week of the season remaining, the 30-year-old's importance to the club was recognised by a two-year contract extension and he was given the role of club captain.

McCormick continued as Argyle's number-one keeper under Sheridan and then Derek Adams. In June 2016 he accepted the offer of a further contract extension, ahead of his 11th season in the first team in which he climbed into the top 20 of all-time club appearances when he donned his gloves for the 328th time. It was certainly a memorable season for him: not only did he keep a clean sheet against Liverpool at Anfield in the third round of the FA Cup, but he also saved a penalty in the replay. As club captain and ever-present in the league campaign, he also led his side back to the third tier at the end of the season, his third promotion with the club.

At the end of an injury-hit 2017-18 campaign came the news - a surprise to some - that 'Super Luke' would not be offered a new contract. With loanee Remi Matthews firmly established in goal, McCormick did not play in the second half of the season, but nevertheless joined his teammates on the pitch after the last home game and received a heart-felt ovation.

It didn't take long for McCormick to find a new club: in July 2018 he signed for Swindon Town, where he played 36 times over the following two seasons. In the summer of 2020 he was offered another contract at Swindon but instead chose to accept an approach by Ryan Lowe to return to Home Park to compete for a starting place with the highly-rated Academy graduate, Mike Cooper. Even though he was two weeks short of 37, the move was widely welcomed because not only would be provide competition between the sticks but his wealth of experience also suggested he could be an invaluable mentor for the 20-year-old prospect.

Greens on Screen is run as a service to fellow supporters, in all good faith, without commercial or private gain.  I have no wish to abuse copyright regulations and apologise unreservedly if this occurs. If you own any of the material used on this site, and object to its inclusion, please get in touch using the 'Contact Us' button at the top of each page. Search facility powered by JRank Search Engine. Hover facility courtesy of Milonic. UK time at page load: 17 May 2021, 03:51.