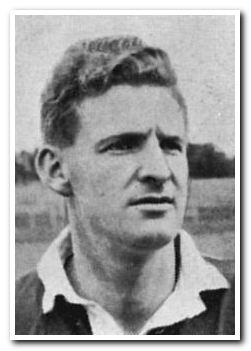 Note: Books suggest he played two games for Argyle, but this is wrong; he made just the one appearance. The common mistake is because of an incorrect line-up often quoted for the game on 27 Feb 1954, as proven by reference to local newspaper archives.

McArthur started his career with his hometown side, Neilston Victoria, before joining Leicester City in 1947. He made nearly 100 appearances in seven years at Filbert Street before moving to Argyle as a potential successor to Jack Chisholm. However, he played only once before leaving the club a year later to join Loughborough side, Brush Sports.

Greens on Screen is run as a service to fellow supporters, in all good faith, without commercial or private gain.  I have no wish to abuse copyright regulations and apologise unreservedly if this occurs. If you own any of the material used on this site, and object to its inclusion, please get in touch using the 'Contact Us' button at the top of each page. Search facility powered by JRank Search Engine. Hover facility courtesy of Milonic. UK time at page load: 17 May 2021, 05:00.