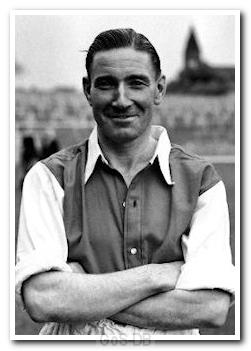 Came from: Arsenal   Went to: Arsenal

Logie was one of 27 in the guest category. Born in Edinburgh and raised in the Grassmarket area, he played junior football for Lochore Welfare before he was snapped up by giants Arsenal in 1939. War was declared shortly after and Logie served in the Royal Navy, whilst also guesting for hometown St Bernard's, Dunfermline Athletic, Grimsby Town, Southampton and Argyle when duty permitted. His single appearance in green came in the capital against rivals Tottenham Hotspur, where it is likely he was borrowed with Arsenal's consent to enable the fixture to be fulfilled, and to give the still untried player useful exposure. As it turned out, Argyle benefited from the services of an Arsenal forward who was destined for a post-war career at the very top of the game.

Logie made his Arsenal first team debut in August 1946 and went on to play 296 times for the club, scoring 68 goals. He collected two First Division championship medals in 1947/48 and 1952/53, and a winners' medal in the 1949/50 FA Cup Final, when he set up both goals in the 2-0 win against Liverpool. In the latter stages of his career he also served as the club's vice-captain behind Joe Mercer. Despite his success at Arsenal he won just a solitary cap for Scotland, against Northern Ireland in November 1952.

He left Highbury in February 1955, becoming player-manager of Gravesend & Northfleet where he lasted five years. Players of the modern era, who have given long service to such a prestigious club as Arsenal, would no doubt never need to work again but post-war football was far from lucrative; after retiring Logie sadly fell on hard times. He was a keen gambler and eventually ended up working in a newsagents in Piccadilly Circus, dying in 1984, aged 64.

Greens on Screen is run as a service to fellow supporters, in all good faith, without commercial or private gain.  I have no wish to abuse copyright regulations and apologise unreservedly if this occurs. If you own any of the material used on this site, and object to its inclusion, please get in touch using the 'Contact Us' button at the top of each page. Search facility powered by JRank Search Engine. Hover facility courtesy of Milonic. UK time at page load: 16 May 2022, 08:47.