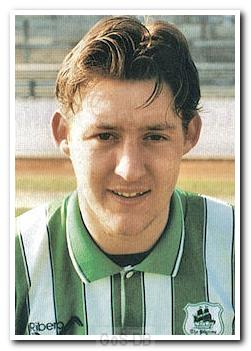 Came from: Chelsea   Went to: Chelsea

Desperately seeking recruitments to boost his struggling squad, new Argyle boss Peter Shilton completed a triple-signing swoop that looked highly promising on paper. Steve McCall and Kevin Nugent arrived on permanent deals, while David Lee was borrowed from Chelsea until the end of the season. A central defender or midfielder, Lee was thrust straight into the action as Argyle lost 1-0 at Port Vale, and he went on to make nine appearances for the Pilgrims as they unsuccessfully fought off relegation. His finest performance in a green shirt came in a 3-1 win at home to Oxford that seemed to have staved off the dreaded drop. A goal  his solitary strike for Argyle  and a dominant display in midfield looked to have propelled him to the top of Shilton's summer shopping list. But the player-manager opted to bring Steve Castle to the club instead, and Lee remained at Stamford Bridge, where he racked up 196 appearances before joining Bristol Rovers in 1998.

Greens on Screen is run as a service to fellow supporters, in all good faith, without commercial or private gain.  I have no wish to abuse copyright regulations and apologise unreservedly if this occurs. If you own any of the material used on this site, and object to its inclusion, please get in touch using the 'Contact Us' button at the top of each page. Search facility powered by JRank Search Engine. Hover facility courtesy of Milonic. UK time at page load: 02 December 2021, 03:02.