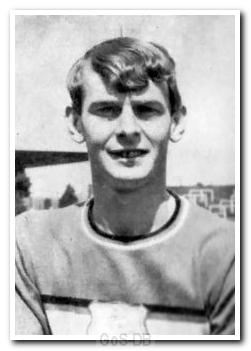 Jennings was a speedy outside-left who made more than 100 appearances on the wing for Argyle, having made his debut in 1964 at just 18 years old. After three years in the first team he was, somewhat surprisingly, sold to Portsmouth in January 1967, and went on to play over 200 times in nearly seven years at Fratton Park. He was also named the Pompey player of the year in 1971. Towards the end of his time in Hampshire he had a brief spell on loan at Aldershot, before moving to Exeter City in 1974, where he finished his career.

Greens on Screen is run as a service to fellow supporters, in all good faith, without commercial or private gain.  I have no wish to abuse copyright regulations and apologise unreservedly if this occurs. If you own any of the material used on this site, and object to its inclusion, please get in touch using the 'Contact Us' button at the top of each page. Search facility powered by JRank Search Engine. Hover facility courtesy of Milonic. UK time at page load: 19 June 2021, 02:07.