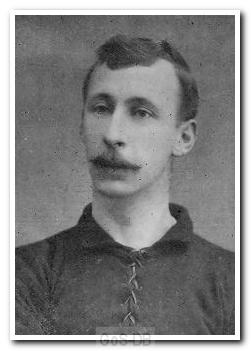 Note: 1) At least two sources say that he also played for Burslem Port Vale before joining Argyle, but others suggest that this was not the case. (2) At least one record book says that all four goals in the match at Northampton on 9th Sep 1905 were scored by Fred Buck. However, the match reports in the Western Morning News, Western Evening Herald and many national newspapers show that the second goal was scored by Bob Jack. The totals for each player are therefore different from those in many record books. (3) At least two record books list Argyle's goalscorers for the FA Cup match against Freemantle on 14th Nov 1903 as Peddie (2), Winterhalder and Picken (2), but reports of the match in the Western Morning News, Western Evening Herald and other newspapers clearly describe the goals by Peddie, Picken (2), Jack and Anderson. The overall goal totals for Peddie, Winterhalder, Jack and Anderson are therefore different from some other sources.

2. Came from: Southend   Went to: Manager

Jack began his playing career with his hometown side Alloa Athletic in 1891, and also represented Fifeshire, before spending six seasons with Bolton Wanderers. He made 110 appearances whilst at Burnden Park, scoring 29 goals from his position of outside-left and establishing himself as one of the fastest wingers in the country.

A serious ankle injury ended his time at Bolton and in 1901 he signed for Preston North End. After a single season with The Lilywhites he had a similar stint at Glossop before becoming Argyle's first professional footballer in 1903. The Argyle handbook of 1904-05 describes him as "our famous flier, probably last season was the best in the player's history". After the departure of Frank Brettell in 1905 he became player-manager but left after just one season following a disagreement with the board.

Moving to Southend United, again as player-manager, he played for four more seasons before he was persuaded to return to Argyle in 1910 to once again take the helm. He made one further appearance on the pitch but became a true club legend - undoubtedly the greatest of them all - after a further 28 years in charge.

Greens on Screen is run as a service to fellow supporters, in all good faith, without commercial or private gain.  I have no wish to abuse copyright regulations and apologise unreservedly if this occurs. If you own any of the material used on this site, and object to its inclusion, please get in touch using the 'Contact Us' button at the top of each page. Search facility powered by JRank Search Engine. Hover facility courtesy of Milonic. UK time at page load: 27 January 2022, 10:40.