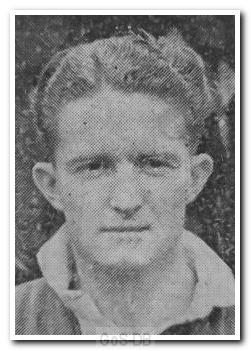 Howshall was one of 21 players whose only first team games for Argyle were in the Football League South season and who usually played in local football or for the Armed Forces. Born in Normacot, Stoke-on-Trent in 1920, he began his career with Stoke City, as did his older brother, Jack, who went on to play for many League clubs in the 1930s. Tommy's career had hardly started when he joined the RAF to serve in the war, but he did manage to make guest appearances for Grimsby Town, Chester City, Southport, Tottenham Hotspur, Watford and Reading during the war years, and also one game for his registered club, Stoke City. In November 1945 he returned from service in Egypt to be stationed at Lea Bridge in east London, and signed for the local club, Clapton Orient, playing 12 times and scoring once in their somewhat confusingly named 1945-46 Football League Division 3 South (North) campaign.

Four months later, in early March 1946, Howshall was transferred to Hope Cove, an RAF radar facility near Salcombe, and played three games for Argyle as a guest. He impressed enough for Argyle to persuade Clapton Orient to part with the player for a fee thought to be around £1,000, and on 27th April 1946  the day of his fourth appearance - he signed full professional terms, having been demobilised from the RAF two days before. Strangely, this turned out to be his last game for the club; whilst he appeared in the team photo for the following season, he did not make the first team.

A clue comes in the Football League transfer list, recorded in June 1947, which shows that Argyle were seeking to recoup their £1,000 outlay, with the reason given as "not amenable to discipline"  an unusual comment for a club seeking to sell him on. He was stlll on the transfer list almost a year later in May 1948, with the reason amended to player wanted to get away. However, a local source suggests that he joined non-league Worcester City in July 1947, where he scored his only goal for the club in a 1-1 Southern League draw with Cheltenham Town on Boxing Day 1947. The remainder of his career, after his final and perhaps acrimonious exit from Home Park, is unclear.

Greens on Screen is run as a service to fellow supporters, in all good faith, without commercial or private gain.  I have no wish to abuse copyright regulations and apologise unreservedly if this occurs. If you own any of the material used on this site, and object to its inclusion, please get in touch using the 'Contact Us' button at the top of each page. Search facility powered by JRank Search Engine. Hover facility courtesy of Milonic. UK time at page load: 17 May 2022, 18:17.