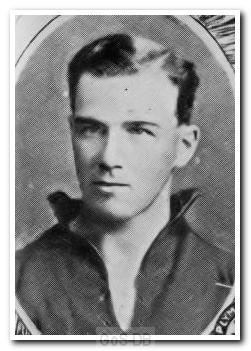 Note: With thanks to the family of Jimmy Heeps for their assistance in revising this profile.

James (Jimmy) Heeps may not be a name with which every Argyle fan is familiar - but they should be - for Heeps scored Argyle's first Football League goal.

Born on 30th November 1894 in Glenvillage within the Parish of Falkirk, the inside-left was signed from local junior side Banknock United in time for the start of the 1920-21 season. He was the only one of the starting XI for Argyle's debut League fixture against Norwich City not to have played previously for Argyle in the Southern League.

His momentous moment in Argyle's history was not without controversy. In the build-up to taking a first half lead, a corner taken by Jimmy Kirkpatrick was aimed towards Heeps who hit the underside of the crossbar from close range. It appeared the ball had crossed the line and there were prolonged appeals. Some reports suggest that the net had rippled yet the referee was adamant with his decision to award a second corner. This time the ball was played short to Arthur Dixon, and his low delivery caused confusion in the Canaries' penalty area during which Heeps pounced to score - for definite this time - Argyle's first League goal.

He went on to complete 16 games for Argyle, scoring just that one goal and, although listed as part of the team for the following season, left early without adding to his tally. Records often show him moving to Airdrieonians but he never made an appearance. Another Heeps with the first name of Andrew, however, did, which could explain this oft-cited mistaken detail. Incidentally, Jimmy did have a brother called Andrew, although it is not clear if this is the same person.

Argyle's Heeps signed for Stenhousemuir on 23rd November 1921, where he remained until joining Hamilton Academical on 30th May 1922. After leaving Accies, Heeps then moved Stateside for the 1923/24 season to play for New York Giants of the early American Soccer League, playing 6 matches and scoring 4 goals (the side was an off-shoot of the baseball team and had no connection with the current day NFL team of the same name). It is also likely that Jimmy played in Chicago. He was awarded a small gold medal for the 'Peel Championship, 1925/26' (Peel Cup) suggesting he played for Pullman FC, the works team of the famous coachworks company and that year's winners. Having experienced life in America, he returned to his native Scotland to sign for amateur side Bathgate on 15th July 1925, where he ended his career.

Jimmy returned to settle with his family in the area of his birth and ran a highly successful family fish & chip restaurant for almost 20 years before retiring at the age of 52. He spent his latter years as a keen golfer; the local Kilsyth and Lennox Golf Club has a trophy named in his honour. James Heeps passed away at the grand old age of 94 on January 1st 1989 in Kilsyth. Whilst reluctant to talk about his exploits, he was, one hopes, proud and aware of the significance of his goal's contribution to Argyle's League history.

I can't deny that upon becoming involved with Greens on Screen and helping Steve, the Jimmy Heeps profile became a bit of initial labour of love and a minor obsession!

Well because he scored our first Football League goal and we knew very little about him - his profile was very brief and we didn't even know his Date of Birth - I was convinced we could do better and there was more information out there.

We knew he was born in Banknock (though this might have been a generalisation rather than his precise PoB) and Argyle signed him from Banknock Juniors in 1920. He later played for Hamilton Academical and Airdrieonians (or so we thought) before moving to the USA to play for New York Giants (an early soccer team not linked to the current NFL side). We wanted to find out his PoB (precisely) and his DoB (which was not listed anywhere in any source).

I can't deny that upon becoming involved with Greens on Screen and helping Steve, the Jimmy Heeps profile became a bit of initial labour of love and a minor obsession!

Well because he scored our first Football League goal and we knew very little about him - his profile was very brief and we didn't even know his Date of Birth - I was convinced we could do better and there was more information out there.

We knew he was born in Banknock (though this might have been a generalisation rather than his precise PoB) and Argyle signed him from Banknock Juniors in 1920. He later played for Hamilton Academical and Airdrieonians (or so we thought) before moving to the USA to play for New York Giants (an early soccer team not linked to the current NFL side). We wanted to find out his PoB (precisely) and his DoB (which was not listed anywhere in any source).

Initially we believed he would have been late teens early 20s when he signed making his DOB around 1895-1905.

A search of census data focused on two potential Jimmy Heeps of the right age and right PoB. I was initially convinced we had the right one - and that he was born in 1900 and died in 1961, aged 61, until the following email arrived from a family member of Jimmy Heeps:

"I see from the date of your post that it was 6 months ago but I happened to come across your request on P@SOTI when I Googled my great-grandfather's name and Plymouth Argyle as I have long known that he played for the club around that time. I am pretty sure that there can't have been many Scottish James Heeps playing for the club at that time so I am fairly confident that it is one and the same person. If you still need some information I can obtain his DoB and DoD and have seen some photos from his playing days of both him and the team of the day which I will happily try and track down. I will have to speak to my mother and uncle to fill in the blanks but please feel free to e-mail me back as I will be able to assist with your request for info, about his life after football and I would also be very interested if you could tell me what you know about his football career".

The email was then followed-up with:

"Apologies but have only just seen your updated request online. I had a look at GoS and the picture is definitely my great grandad and no doubt most of the information is correct but he lived long after 1961, I was born in 1977 and spent many years visiting him".

And it was this that directed us to the fact it was the other of the two Jimmy Heeps that we had initially guessed, which gives you the profile you read above today - massively more detailed than the original and more befitting for the scorer of our first League goal. The good news was the he was actually born in 1894 as you can see and live a very long and fulfilled life - and we hope was aware and quietly content with the significance of his goal's contribution to Argyle's League history.

Greens on Screen is run as a service to fellow supporters, in all good faith, without commercial or private gain.  I have no wish to abuse copyright regulations and apologise unreservedly if this occurs. If you own any of the material used on this site, and object to its inclusion, please get in touch using the 'Contact Us' button at the top of each page. Search facility powered by JRank Search Engine. Hover facility courtesy of Milonic. UK time at page load: 17 May 2022, 18:24.