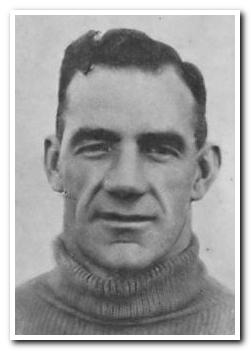 The significance of Bill Harper in the history of Plymouth Argyle is a constant reminder to the current team when they use the training pitch at Harper's Park. Born in Tarbrax in Lanarkshire, he started out in Scottish junior football with Winchburgh Violet and then Winchburgh Thistle before moving to Edinburgh Emmett. In 1920 he signed for Hibernian and made over 100 Scottish First Division appearances, playing in two Scottish Cup Finals but having to make do with runners-up medals on both occasions. He won 9 out of his 11 caps whilst at Easter Road and also represented the Scottish League.

In 1925 Harper was signed for Arsenal by Herbert Chapman  one of the great manager's first signings  for £4,000, then a record for a goalkeeper. He finished the 1925-26 season and started the next as first choice at Highbury but a 4-2 derby defeat by Tottenham Hotspur in December 1926 saw him unceremoniously dropped by Chapman after 42 appearances. Harper then decided to try his luck in the fledgling American Soccer League (ASL).

His spell in America would have certainly been character building, playing during the Great Depression and through the 'Soccer Wars', the power struggle between the ASL and US Football Association, which saw a high number of clubs relocate, merge and fold. He first signed for Fall River Marksmen in 1927 and played 79 times in a two-year spell, helping them win the ASL title in the 1928-29 season. He then moved to Boston Soccer Club  also known as the Boston 'Wonder Workers'  following the Marksmen's owner who had acquired the club, and played four times before they then became Boston Bears, for whom he made an additional 21 appearances. For the 1929-30 season he signed for New Bedford Whalers, for whom he played 31 times before briefly re-signing for Fall River Marksmen, playing in friendlies against Kilmarnock and Rangers and touring Central Europe. Harper then briefly returned to Arsenal  and it was a timely return  collecting a Football League winners' medal in 1931 as The Gunners won their first ever title, adding a further 21 appearances to his previous 42 outings.

In December 1931 Bob Jack brought Harper to Home Park, where he competed with Harry Cann for the number one spot in his first two years at the club, usually winning the battle, When he lost his place in 1934, was named as the team trainer, but the club retained his registration and he made occasional appearances up to and including the 1940 wartime South West Regional League.

Many have made more appearances for Argyle but no one else can claim 50 years of loyal service as a player, trainer, groundsman, laundryman, and anything else that needed doing, and nearly 50 years after his debut he was awarded a testimonial game, fittingly with Arsenal as the opposition. Bill Harper died on 12th April 1989 at the age of 92, in the city that had had such an impact on his life.

Greens on Screen is run as a service to fellow supporters, in all good faith, without commercial or private gain.  I have no wish to abuse copyright regulations and apologise unreservedly if this occurs. If you own any of the material used on this site, and object to its inclusion, please get in touch using the 'Contact Us' button at the top of each page. Search facility powered by JRank Search Engine. Hover facility courtesy of Milonic. UK time at page load: 19 May 2022, 03:06.