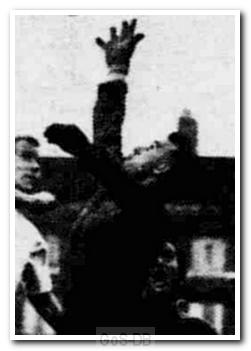 Formerly on Torquay United's staff and also a Devon County water polo player, Gee played once for Argyle as an amateur, one of several goalkeepers tried following the retirement of Bill Shortt and Les Major.

First reports of J. Gee, a goalkeeper from Plymouth, came in January 1950 when he was selected for the Devon County side in the National Association of Boys' Clubs' football competition, following a trial match at Kingsteignton. The following day another report shows his club as Virginia House, which was an organisation based in Looe Street in the city.

Gee, described as 'a local lad just out of the RAF' by the Western Evening Herald, was included in a public practice match at Home Park in mid-August 1956. Having completed his National Service and a short spell of demobilisation leave, he was surprisingly selected for his first team debut only a fortnight later, after Argyle had conceded 12 goals in its first three games of the season.

Gee was unable to prevent Argyle losing 3-0 to Queens Park Rangers at Loftus Road, in a game where Rangers netted seven times but remarkably had four goals disallowed for infringements. A report states that the Plymouth defence "looked unsteady when under pressure and Gee in goal was given plenty of work".

Two days later, Argyle's goalkeeping crisis was solved with the signing of Harry Brown, an experienced keeper from Queens Park Rangers. Whilst manager Jack Rowley said he "was not writing him off for the moment", Gee never played for the first team again, and his name does not appear in the retained list at the end of the season. Most likely he was released at the end of his trial.

Footnotes: 1) One publication suggests that Gee came from and returned to Launceston Town, but we can find no such evidence and it conflicts with other information. 2) The photo, the best we can find, is from the West London Observer report of his only game for Argyle.

Greens on Screen is run as a service to fellow supporters, in all good faith, without commercial or private gain.  I have no wish to abuse copyright regulations and apologise unreservedly if this occurs. If you own any of the material used on this site, and object to its inclusion, please get in touch using the 'Contact Us' button at the top of each page. Search facility powered by JRank Search Engine. Hover facility courtesy of Milonic. UK time at page load: 22 May 2022, 12:48.