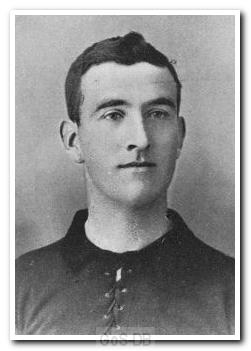 Born in 1884 in Ardrossan, Ayrshire, Fullarton began his career at Sunderland, playing alongside his brother William. When the elder brother moved to Home Park as manager in 1906, 'Davie' followed him and was virtually ever-present in the back four throughout his single season in Plymouth. When William was relieved of his duties, for financial reasons, at the end of the 1906/07 campaign, David also left the club. He then spent three seasons with New Brompton, making 27 appearances.

Greens on Screen is run as a service to fellow supporters, in all good faith, without commercial or private gain.  I have no wish to abuse copyright regulations and apologise unreservedly if this occurs. If you own any of the material used on this site, and object to its inclusion, please get in touch using the 'Contact Us' button at the top of each page. Search facility powered by JRank Search Engine. Hover facility courtesy of Milonic. UK time at page load: 27 September 2021, 17:32.