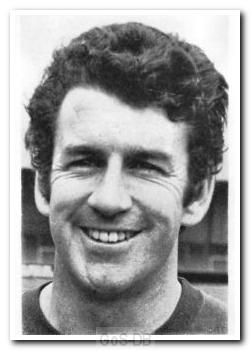 Dunne built his reputation as a quality goalkeeper with 67 appearances for Matt Busby's Manchester United in the early 1960s. United had signed him from Shamrock Rovers after he had previously had a spell with Everton. The arrival of Alex Stepney at Old Trafford limited Dunne's first team opportunities, and he joined Argyle in 1967, winning the Player of the Season award after his first full campaign. The fearless Dunne possessed sharp reflexes and was an excellent shot-stopper  his heroics were a weekly highlight of the struggling Argyle team of the late 1960s - but he was occasionally vulnerable on crosses. He left Argyle in 1970, returning to Shamrock Rovers where he spent the rest of his professional career. He won five caps for the Republic of Ireland and went on to be player-manager of Thurles Town, Bray Wanderers and Shelbourne.

Greens on Screen is run as a service to fellow supporters, in all good faith, without commercial or private gain.  I have no wish to abuse copyright regulations and apologise unreservedly if this occurs. If you own any of the material used on this site, and object to its inclusion, please get in touch using the 'Contact Us' button at the top of each page. Search facility powered by JRank Search Engine. Hover facility courtesy of Milonic. UK time at page load: 27 September 2021, 17:18.