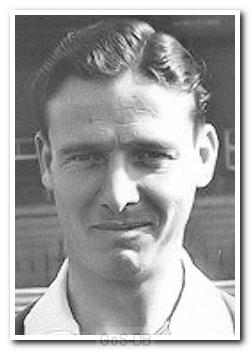 Came from: Arsenal   Went to: Arsenal

Cumner was one of 27 in the guest category, having played in the top flight and been capped by Wales in 1939. Born in Cwmaman near Aberdare, he started his career as a youth with Aberaman Athletic and won Welsh schoolboy international honours before starting his professional career, illustriously, with Arsenal in 1935. He initially joined as an amateur and like many of the era also worked as a member of the club's ground staff. As a player at Highbury, he was initially loaned out to Margate and later Hull City, for whom he made his Football League debut in the 1937-38 season, playing 12 times and scoring four goals. Returning to Highbury for the 1938-39 campaign, he broke into the first team with a debut in September 1938, away at Wolverhampton Wanderers, where he scored the only goal of the game  the winner on his debut no less. In 1939 he was also called up by Wales, winning three caps in the British Home Championship. Needless to say, the outbreak of war couldn't have come at a worse time for a man who had finally broken into Arsenal's first team and had just won international honours.

Early in the war, Cumner served in the Royal Marines but was seriously burned on active duty. He recovered sufficiently to play in ten wartime internationals for Wales, scoring three goals, and made a further 25 appearances for Arsenal during those war years, scoring six goals. He also appeared as a guest for a remarkable number of clubs, including Cardiff City, Fulham, Liverpool, Portsmouth, Swansea Town, his first club Aberaman Athletic, Port Vale, Clapton Orient and Argyle.

With the resumption of the traditional Football League programme, Cumner signed for Notts County in 1946, playing 66 times and netting 11 in a two-year spell. In 1948 he returned south to sign for Watford, where he played a further 62 games, scoring 7 goals in another two year spell. At the start of the 1950s he then returned north for possibly the most productive period of his career, with Scunthorpe United. He was no doubt lured to The Old Showground by The Iron's manager Les Jones, his former Arsenal team-mate. This turned out to be a productive move for all parties as he played 102 times, scoring 21 goals. After Scunthorpe, records show he then registered with Bradford City in 1953 but did not make a first team appearance for the club. By then in his mid-thirties and perhaps sensing his footballing career was nearing its end, he wound down with Poole Town, Bridport and then Swanage on the Dorset coast.

Cumner had enjoyed a successful career both sides of war but one which might been immeasurably better had it not been interrupted. He made over 250 League appearances and scored just short of a half century of goals, but he must have wondered what what his career might have been.

When I was 16 our youth club leader, Skip Musslewhite, entered Pokesdown Lads, our all-conquering youth team, in the Bournemouth Men's League, where we became very successful in going from Division 4 to Hampshire League Division 2 within ten years, besides winning many cup trophies, including being the only club ever to win the Hampshire Intermediate Cup when not playing in a Hampshire League. Our club played Swanage which was the first and only time I played against Horace Cumner, on a winter's day at Day Park and in the first half on a frozen pitch I was soon chasing a shadow. The winter sun then turned the other half of the pitch into a mud bath and on kicking off the second half I was soon on my backside. Horace was close by and told me to get up, play the ball to my winger and go for the return and for the rest of the game continued to give me advice - a sportsmanship I never came across during my successful soccer career, in Africa and Asia, including playing with six of the 1966 England World Cup team.

He was a gentleman and I wished that later I had met him again to have a real chat with him as I have never forgot his kindness on that day when I was starting out on my journey as he was finishing his.

Greens on Screen is run as a service to fellow supporters, in all good faith, without commercial or private gain.  I have no wish to abuse copyright regulations and apologise unreservedly if this occurs. If you own any of the material used on this site, and object to its inclusion, please get in touch using the 'Contact Us' button at the top of each page. Search facility powered by JRank Search Engine. Hover facility courtesy of Milonic. UK time at page load: 16 May 2022, 08:54.