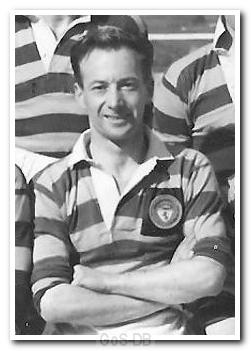 Came from: Army   Went to: Released

Born in Gainsborough, Clark was one of 21 players whose only first team games for Argyle were in the Football League South season and who usually played in local football or for the Armed Forces. He was approached by the Pilgrims after a game against his regiment - he served with and played for the 88th LAA (the Light Anti-Aircraft Battery, part of The Royal Artillery).

The club registered him with the Football League on Christmas Eve 1945, and he was picked to play a match at Swansea on Boxing Day but had to decline as this was his wedding day. He made his first team debut and solitary appearance at outside-left in January, along with Donald Case, in a home defeat by Newport County. Curiously, in the return fixture a week later, Clark was loaned to Newport for the game because the Welsh club was unable to field a full side.

At the end of the 1945-46 season, after his demob, Clark was offered a professional contract at Home Park but chose to move back to his work and family in north Devon, where he went on to play amateur football for Barnstaple and Braunton. 'Nobby', as he was often called in footballing circles, also played for the Devon FA side.

Footnote: grateful thanks to Ronald's daughter and family for their contact and help with this profile, and for the photo, which was before the final of the Westward Ho! Cup, a year or two after his time in Plymouth.

Greens on Screen is run as a service to fellow supporters, in all good faith, without commercial or private gain.  I have no wish to abuse copyright regulations and apologise unreservedly if this occurs. If you own any of the material used on this site, and object to its inclusion, please get in touch using the 'Contact Us' button at the top of each page. Search facility powered by JRank Search Engine. Hover facility courtesy of Milonic. UK time at page load: 16 May 2022, 20:20.