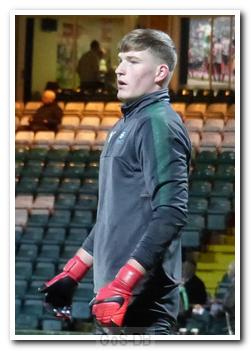 Born in Hillingdon, London, Mannion was signed on an emergency loan by Argyle during the troubled 2017-18 season when a freak spate of injuries to goalkeepers resulted in Mannion becoming the club's sixth keeper of the season before December had arrived.

With Luke McCormick, Robbert te Loeke, Kyle Letheren and apprentice Mike Cooper all out of the reckoning, an injury to emergency loanee Remi Matthews at Portsmouth in late November resulted in Mannion joining the Pilgrims three days later as a same-day signing for the EFL Trophy defeat at Yeovil Town.

Mannion joined AFC Wimbledon at the age of 16, becoming a key member of their under-18 team that knocked out the Premier League Academy sides from Watford and Newcastle United before their FA Youth Cup 5th round defeat by Chelsea.

In January 2016 he was invited to train with the England under-16 squad and was later called up to the under-19 squad, making his international debut in a 1-1 draw with the Netherlands in September 2016. He made a second appearance a month later in a 21 win over Hungary.

In July 2016, he signed for Premier League club Hull City on a three-year deal, with Wimbledon entitled to a compensation fee settled by a Tribunal. This was ruled to be an initial fee of £100,000, plus further payments of up to £100,000 for appearances for the Tigers' first-team and up to £225,000 should he become an under-21 and full international in a competitive match.

He spent his first season with Hull's under-23 side and then made his first team debut in August 2017 in an EFL Cup defeat at Doncaster Rovers, before his hurried signing for Argyle three months later.

Although Argyle had received permission for Mannion to play at Bradford City in the FA Cup four days after his Pilgrims' debut, his services were no longer required. To the surprise of many, Luke McCormick had recovered from injury and emergency loan conditions triggered Mannion's return to Hull, having never graced Home Park.

In August 2018 he joined National League side Aldershot Town on loan until the following January, a deal that was then extended to the end of the 201819 season.

Greens on Screen is run as a service to fellow supporters, in all good faith, without commercial or private gain.  I have no wish to abuse copyright regulations and apologise unreservedly if this occurs. If you own any of the material used on this site, and object to its inclusion, please get in touch using the 'Contact Us' button at the top of each page. Search facility powered by JRank Search Engine. Hover facility courtesy of Milonic. UK time at page load: 17 May 2021, 03:41.