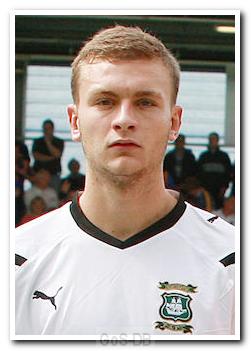 Gibson joined Argyle on loan from Middlesbrough, the club he began his career with as a 12-year-old in 2005. The nephew of Boro chairman Steve Gibson, he progressed from the youth academy ranks to the reserve team, captaining the side, and turned professional in 2010. He represented England at under-17 level, where he was part of the team that won the 2009 Nordic Cup and the UEFA European Under-17 Championship in 2010, and in 2011 won his first cap for the under-18 side. Primarily a left-back who could also play at centre-back or on the left side of midfield, he broke into Middlesbrough's first team squad during the 2010-11 campaign and made his first team debut as a substitute against Coventry City in April 2011.

Gibson played 13 times in his spell at Home Park, usually as a central defender. In November 2011, with a first team place no longer likely after Darren Purse's arrival, Middlesbrough recalled him and prematurely terminated the loan agreement. In February 2012, still only 18, he was loaned to Conference National side York City until the end of the season, which proved to be a fortuitous spell for the player. He appeared twice for The Minstermen at Wembley Stadium: first in a 2-0 win against Newport County in the FA Trophy Final, and then just eight days later in a 2-1 win against Luton Town in the Conference National Play-off Final, when York returned to the Football League after an eight year absence. In all he made 11 appearances in his spell with City before returning to the Riverside Stadium.

In August 2012 Gibson began another loan spell, this time with Tranmere Rovers on an initial one-month deal that was then extended until the end of the year. An injury forced a return to the Riverside early in December, but good news soon followed when the 19-year-old signed a new four-year contract with Boro. By mid-March 2013 he had fully recovered from injury and returned to Tranmere for a second loan spell, this time until the end of the season. In all he made 33 appearances and scored once for the Prenton Park side.

After the experience gained at his three loan clubs, Gibson became a regular with Middlesbrough in the Championship, and in 2014 received his first call-up to England's under-21 side.

His stock continued to rise; he received his first call-up to the full England squad in March 2017, replacing the injured Chris Smalling for the 2018 FIFA World Cup qualifier against Lithuania, although he did not play.

Having made a total of 203 appearances (scoring 4) across ten seasons at the Riverside, the 25-year-old moved to Burnley in August 2018 on a four-year deal for a reported joint club record fee of £15 million.

Greens on Screen is run as a service to fellow supporters, in all good faith, without commercial or private gain.  I have no wish to abuse copyright regulations and apologise unreservedly if this occurs. If you own any of the material used on this site, and object to its inclusion, please get in touch using the 'Contact Us' button at the top of each page. Search facility powered by JRank Search Engine. Hover facility courtesy of Milonic. UK time at page load: 27 January 2022, 11:09.