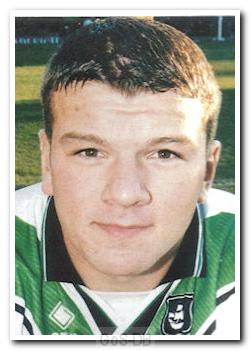 Branston was an archetypal lower-league journeyman by the time he arrived at Home Park for a second spell in 2013, having played for a remarkable 19 professional clubs, including 15 loan spells, and amassed 18 career red cards.

He began his career with his hometown club, Leicester City, but failed to make the first team. Between 1997 and 1999 he left Filbert Street on loan seven times. After spells with Rushden & Diamonds and Colchester United he moved to Home Park in November 1998. A no-nonsense centre-back, he was borrowed by Kevin Hodges to overcome an injury crisis. The 19-year-old appeared eight times in green, scoring in a 1-1 draw at Rochdale. After returning to Leicester he had a second spell with Rushden, followed by a temporary move to Lincoln City.

In late 1999 he joined Rotherham United on loan, a move made permanent for £50,000 shortly after. Over the next two years he became a fixture at the heart of the Rotherham defence and helped the club win successive promotions. With the Millers in the Championship, Branston's opportunities became more limited and in 2003-04 he had loan spells at Wycombe Wanderers and Peterborough United. In 2004 he signed for Sheffield Wednesday, but could not secure a regular place in the team, and returned to Peterborough United for a second loan period. Later that year he moved to Oldham Athletic and enjoyed a productive 18-month stay at the club.

In July 2006 he returned to Peterborough for a third spell, this time on a permanent basis. After initially being named club captain and becoming first choice centre-back, he fell out of favour and the following season had loan spells at Rochdale and Northampton Town. He was released by Peterborough and signed a short-term contract with Notts County in January 2008, moving on to Kettering Town the following month. Branston spent a successful 18 months at Kettering, being named captain and helping the team win promotion to the Conference in his first season. His impressive performances led to interest from several clubs and in July 2009 he signed for Burton Albion. Six months later he moved to Torquay United on loan, and made a permanent move to Plainmoor when released by Burton the following summer.

Branston's consistent performances for the Gulls throughout the 2010-11 campaign saw him named the club's Player of the Year and he was also named in the PFA Team of the Year. Despite this success he chose to move to Bradford City when his contract expired, and began the season as a regular member of the team. However, a change of manager saw him lose his place and he joined former club Rotherham United on a short-term loan. He returned to Valley Parade to play in a handful of games at the end of the 2011-12 season, but was released at the end of the campaign. In June 2012 Branston joined Aldershot Town but could not break into the first team and moved to Bristol Rovers on loan that November. On his return to Aldershot his contract was cancelled by mutual agreement and he returned to Home Park a few days later after impressing new manager John Sheridan during a training session.

Playing a pivotal role in the rear-guard action that helped keep Argyle in the Football League, he became a popular member of the club during his second spell, signing a one-year contract extension in May 2013. A string of injuries disrupted his 2013-14 season and it came as no surprise when he left the club by mutual consent at the end of the campaign. He announced his retirement in July 2014 after a 16-year career that took him to 19 clubs, with his 481st and final match being for Argyle on Boxing Day 2013, a month short of his 35th birthday.

In February 2015 Branston was appointed as chief scout and then head of recruitment at Notts County, one of his many former clubs. He left County in the following May and a month later joined Nuneaton Town as operations manager, while working towards his UEFA A licence. In April 2017 he became director of recruitment and development at Chesterfield, and five months later was made the club's caretaker manager.