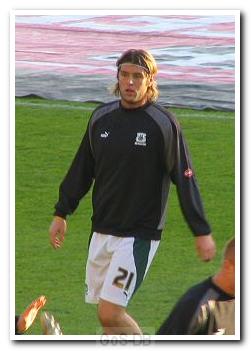 A product of the West Ham United youth system, Ward spent loan spells with Peterborough United and Bristol Rovers early in his career before establishing himself in the first team and helping West Ham gain promotion from the Championship. With his chances limited in the Premier League he joined Argyle on loan and impressed greatly in the centre of defence during his three-month stay. After returning to West Ham he signed a contract extension, but was sold to Coventry City for £1million just months later. Ward was virtually ever-present during his first three seasons with Coventry but then lost his place and had loan spells with Doncaster Rovers and Preston North End. In 2010 he joined Norwich City and was a virtual ever-present in the side that won promotion to the Premier League. A serious knee injury hampered him at the Canaries and he joined Nottingham Forest on loan before signing for Bournemouth in 2013, following their promotion to the Championship.

Ward played 28 times for the south coast club, as well as two spells on loan at Huddersfield Town. His contract with Bournemouth was cancelled by mutual consent in January 2016 and a few days later he signed for Blackburn Rovers on a two and a half year deal, re-joining Paul Lambert, his former boss at Norwich. However, his first year at Ewood Park included an extended spell on the sidelines after he injured an ankle on the first day of the 2016-17 season, and then, on his return to training in October, he broke it.