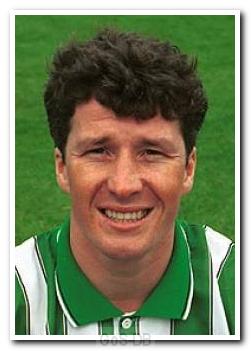 Tony Spearing was a self-confessed 'lower-league scrapper', who was another victim of Peter Shilton's managerial cull at Home Park. Signed on a free from Leicester City in the summer of 1991 - whom he had joined three years earlier for the princely sum of £100,000 from Norwich City - Spearing made the Argyle left-back spot his own during the 1991-92 season. His battling qualities mirrored the modus operandi of David Kemp's agricultural second-tier strugglers, but would prove his undoing when Shilton was appointed in February 1992.

Immediately banished to the reserves and transfer listed, Spearing sought to catch the eye of his manager in a friendly at Bodmin in the summer of '92, but his over-zealous performance and refusal to obey touchline orders to come off further alienated him in the eyes of his high-profile boss, and he was allowed to join Peterborough United in January 1993.