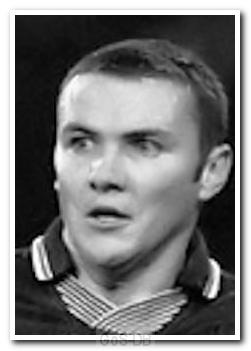 Signed on a month's loan from Wimbledon, Blackwell was one of several Dons that David Kemp, the former Assistant Manager at Plough Lane, brought to Home Park. The 20-year-old centre-back had only played three times for the top-flight club, but managed five full appearances and a further two from the bench in his four weeks with Argyle, and he continued that promising form after his return, collecting six England Under-21 caps the following season. His career at Wimbledon lasted 14 years, spanning the name change from First Division to Premiership and continuing after the club's relegation from the top flight; in total making over 200 appearances and scoring his only league goal. He moved on to Brighton & Hove Albion in October 2002 and retired two years later at the age of 34.