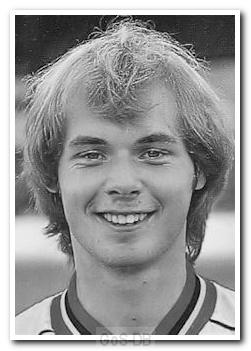 Came from: Watford   Went to: Watford

Hemel Hempstead-born Price was a young defender who joined Argyle on loan from Watford in the 1983-84 season as part of a double loan that also saw Francis Cassidy arrive. Price had spent his youth career with The Hornets and had made just a handful of first team appearances for Graham Taylor's outfit when he moved to Home Park. Like Cassidy, he made his debut in an Associate Members' Cup match at home to Torquay in February 1984 and his solitary League appearance came in the following month at home to Brentford. Vicarage Road colleague Cassidy's Argyle career followed the same two matches before both returned to Vicarage Road. However, despite playing only eight games for The Hornets, one of those came later in the 1983-1984 season, lining up against Argyle in the FA Cup Semi-Final at Villa Park. Timing his return to Vicarage Road to perfection, he was also selected to start their subsequent FA Cup Final against Everton, where he had to be content with a runners-up medal. Without further appearances for Watford, Price was loaned to Blackpool in 1985 before being released. He went on to play three games for Swansea City in the 1985-86 season before a continuing knee injury forced him to move into non-league football after a League career that totalled a mere 25 games but included an FA Cup Final. He played for several non-league teams, most notably Wycombe Wanderers before their upward rise, and managed hometown team, Hemel Hempstead Town.