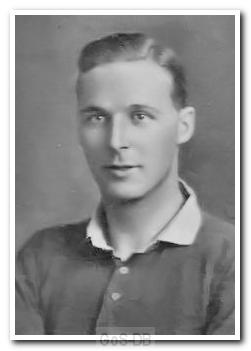 Born in Bolton in 1899, David Jack came through the junior ranks at Argyle along with brother Robert (Rollo), the sons of manager Bob Jack. A versatile inside-forward, he had served with the Royal Navy during World War One, playing for the Royal Navy side and also as a guest for Chelsea during the conflict. On his return to Home Park he soon became a regular member of the first team and was selected as one of the starting XI for Argyle's debut League fixture against Norwich City in 1920.

With that first League campaign underway, it was clear he was destined for greater things and Jack duly signed for hometown club Bolton Wanderers midway through the 1920-21 season for a fee of £3,500. He permanently cemented his place in football folklore by scoring the first goal at the original Wembley in the 1923 'White Horse' Final, which Bolton won 2-0 against West Ham United. Spending eight hugely successful years with the Trotters, he won England caps and the FA Cup again, scoring the only goal against Manchester City in 1925-26. At the end of his stay with the Lancashire side he had scored 144 goals in 295 league games.

This persuaded the great Herbert Chapman to spend over £10,000 (more than double the previous world record transfer fee) to take him to Highbury and he won an FA Cup winners' medal for the third time (the first player to do so with two different clubs), courtesy of the 1930 Final against Huddersfield Town. Jack completed 208 games for the Gunners, scoring 124 times, and was part of three League Championship winning sides. Towards the end of his time with Arsenal he was vying for his place with another former Pilgrim, Ray Bowden. By the end of his playing career he had won nine England caps, scoring three times and played for the Football League representative side five times. He later went on to manage Southend United, Middlesbrough and Shelbourne.

Greens on Screen is run as a service to fellow supporters, in all good faith, without commercial or private gain.  I have no wish to abuse copyright regulations and apologise unreservedly if this occurs. If you own any of the material used on this site, and object to its inclusion, please get in touch using the 'Contact Us' button at the top of each page. Search facility powered by JRank Search Engine.Milonic UK time at page load: 07 March 2021, 23:51.