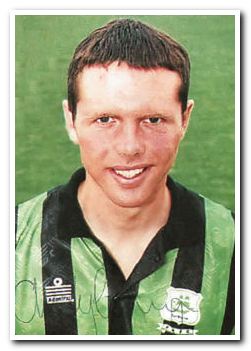 The departure of Andy 'Jock' Morrison to Blackburn at the end of the 1992-93 season was seen as something of a travesty by Argyle fans. Morrison was a proven centre-back of some quality, and the loss of his strength and determination would be keenly felt at the heart of Argyle's defence. But manager Peter Shilton had a replacement in mind who ended up costing less than half of the money raised by Morrison's sale.

Derby's Andy Comyn was a tall, gangly centre-back who Shilton had watched first-hand when himself a Rams player, and had proven pedigree  having once been on Manchester United's books and having played against Inter Milan in the Uefa Cup. Duly signed for £200,000, Comyn went straight into Shilton's defence alongside Keith Hill, and was an ever present in league and cup as The Pilgrims surged into the playoffs. The former Villa man also bagged five goals to underline his worth to Argyle's cause. However, he and his fellow centre-back Hill were given a torrid time by Burnley striker John Francis in the second leg of the playoff semi-final, confirming many people's suspicions that the defence was the weak link in an attacking side that had scored 88 goals that season.

The following season was an ordeal for Argyle as they slumped to relegation, and a personal nightmare for Comyn. Asked to form a partnership with new arrival Peter Swan, his form suffered as he failed to blend with the record signing's style. By March, The Pilgrims were deep in relegation trouble and Comyn had played his last game for the club. A debilitating back injury curtailed his Argyle career  he was released that summer by Neil Warnock  and he subsequently went on trial at West Brom. Despite being offered a contract by The Baggies, the 28-year-old was mentally drained by the pressures of professional football and decided to pursue a career in accountancy instead. He combined playing for Hednesford Town with working at an accountancy practice owned by the Hednesford manager, and he later joined a firm in Birmingham once his playing days were over.