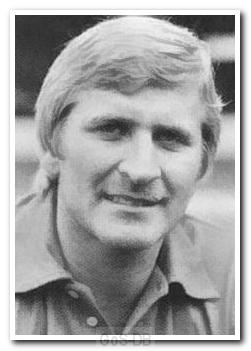 Born in Edenbridge in Kent, Burns started his career in non-league football with Tonbridge Angels before his goalkeeping potential was spotted by Arsenal. Making his League debut in October 1964, he went on to make 24 consecutive appearances and played a total of 31 times for The Gunners. However, having shipped 47 goals in those 31 games, he was dropped in favour of future Green, Jim Furnell. Released from Highbury in July 1966 he signed for Brighton and Hove Albion, for whom he played 54 times in a three year spell, before returning to the capital with Charlton Athletic in 1969. After only 10 appearances for the Valley side he played briefly for Tonbridge Angels again before moving to South Africa to play for both Durban United and Maritzburg. He returned to the UK to sign for Crystal Palace in 1973, playing 90 times in a three year spell. Whilst at Selhurst Park he was loaned to Brentford in the 1976-77 season, playing 6 times. Upon leaving Selhurst Park he played briefly for Memphis Rogues in the North American Soccer League (NASL), the precursor to the current MSL.

Returning to the UK in 1978 he signed for Argyle in time for the 1978-79 season to provide experienced cover for the young Martin Hodge. Having made 11 appearances in all competitions he had left Home Park by December 1978 to join Tonbridge Angels for a third time, and later played for Hastings United and then Dartford. After hanging up his gloves, having played for Tonbridge Angels three times, he repeated the feat in management, taking the reins at that club in three different spells, as well as managing Gravesend & Northfleet. He then spent 14 seasons as Millwall's goalkeeping coach from 1992 to 2006, including a brief spell as joint caretaker manager with Alan McLeary in April 2006. He was later goalkeeping coach with Crystal Palace before retiring in November 2007.