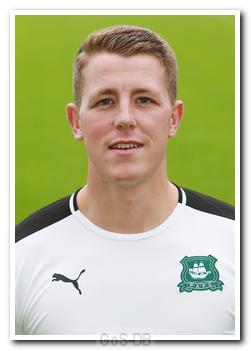 Forfar-born McCallum began his football with Lochside Boys Club in his hometown before joining Aberdeen's youth setup at the age of 11. Eighteen months later he moved to Dundee United, where in June 2009 he signed full-time at just 16. The 6ft 3in goalkeeper made his only senior appearance for the Terrors five years later, ironically a defeat by Aberdeen in the Scottish Premiership, having gained valuable experience through loans to hometown Forfar Athletic, Peterhead and Berwick Rangers.

With caps for Scotland at under-17 and under-19 levels, he signed an extended contract at Tannadice in June 2014, and was then loaned out again, first to Arbroath and then Livingston, where he later signed permanently until the end of 2015-16 season.

At 23 years old and with 96 first team appearances to his name, McCallum became Derek Adams 14th signing of the summer of 2016, after a pre-season trial that included the second half of the Pilgrims 6-0 win at Bovey Tracey. He joined Luke McCormick and Vincent Dorel in a three-man 'keeper pool under the watchful eye of goalkeeping coach and ex-Pilgrim, Rhys Wilmot.

In the promotion season of 2016-17, McCallum made just two appearances for Argyle and remained mainly as back-up to the immovable Luke McCormick and cover for Vincent Dorel, although he frequently travelled to away matches with the squad and was a popular member of the team. At the end of the season he was offered a new contract by Derek Adams but declined and with a young family, elected to return to his homeland and sign a one-year deal with home-town club Forfar Athletic, following their promotion to Scottish League One. McCallum signed on at Station Park five years after he first played for the Loons during a loan spell from Dundee United.