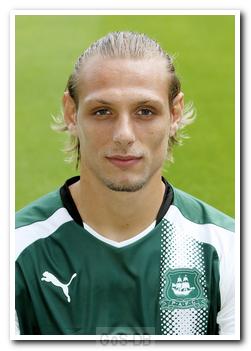 Bolton-born Threlkeld became Derek Adams' eighth summer signing (five permanent and three loanees) when he arrived at Home Park at the end of August 2015. A right-sided defender who could also play a holding midfield role, he took advice from former Argyle loanee Andy Kellett before committing to a loan move to the South West.

Threlkeld was a product of Wanderers' youth academy and made his first team debut in the Championship in April 2014. He went on to make eight senior appearances over the following 12 months, as well as captaining the club's under-21 side.

Adams had enquired about a season-long loan shortly after his appointment, but a deal was delayed when Threlkeld picked up an injury on Wanderers' pre-season tour of Austria. Having returned to action with their under-21s, a half-season loan was agreed and he made his debut for the Pilgrims a few days later, as a substitute in the Johnstone's Paint Trophy win at Wimbledon. Threlkeld returned for a new three-month loan in the January 2016 transfer window, which left him unable to take part in the last five games of the Pilgrims' League Two season. Nevertheless, he played an important part in Argyle's promotion push, both as a useful midfielder and later at right-back.

With Argyle heading for the play-offs, Threlkeld played three more Championship games for Bolton in the final few weeks of the season before finding himself released by the relegated club. In July 2016 the 21-year-old returned to Home Park to re-sign for the Pilgrims, this time on a permanent contract, to become the manager's tenth capture for the new season.

Playing on the right side of the defence in his second spell for the club, Threlkeld became an important part of Argyle's promotion-winning side of 2016-17, his solid and often forward-thrusting performances making him popular with the fans. With the Pilgrims back in the third tier, injuries disrupted his third season at Home Park and although he was offered a renewed contract in May 2018, the 24-year-old opted to join Belgium top-flight side Waasland-Beveren, just ten days into the close season.