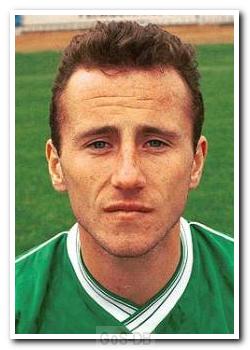 Brown was brought to Argyle by his father, manager Ken Brown, after serving as an apprentice with Norwich City. He established himself as the first choice right-back in 198889 and caused many a defence problems with his pace before moving to West Ham in 1991.

He scored five league goals for the Hammers but the winner against Manchester United in April 1992 was especially sweet for Leeds United fans as it basically handed the title on a plate to the Peacocks and severely dented Uniteds hopes.

After falling out of favour at Upton Park he had loan spells with Huddersfield Town, Reading, Southend United, Crystal Palace and Birmingham City before joining the latter permanently. Just six months later he was sold to Millwall where he had a successful 18-month stay. After a short time with Gillingham, he moved into non-league football with Kingstonian and went on to play for Portadown, Barry Town, Tilbury and, finally, FC Torrevieja in Spain.

In 2000 he started his coaching career at Barry Town, then after three seasons in Wales moved to Spain where he was a coach, manager & director of Football at CD Javea, a Spanish regional league side.

After nearly six years in sunny Spain, he returned to the UK and had spells with Grays Athletic, Tooting & Mitcham, Barnet and Chelmsford City. Following the departure of Dean Holdsworth as Chelmsford boss in November 2013, Brown took charge as caretaker manager. A UEFA 'A' Licence coach, he was appointed Dagenham & Redbridge under-16 manager in January 2014 before becoming the League Two club's academy manager.