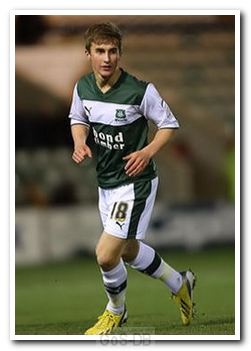 Born in Bristol, Bryan won a place at Bristol City's Academy at an early age and progressed through the ranks to sign apprentice forms in 2009. Despite suffering a broken leg when playing for the Robins' under-18 side in the second year of his apprenticeship, he was offered a two-year professional contract in April 2011, which was extended to the summer of 2015 in October 2012. That same month Bryan was selected for Scotland's under-21 squad, but was forced to withdraw because of concussion. Two months later he was loaned to Bath City for two months, where he played four league games in the Conference National and then in March 2012, still only 18, he earned his first team debut for Bristol City in a 3-2 win over Leicester City.

With 13 Championship appearances under his belt, including 9 starts, Bryan arrived at Home Park in March 2013 in an urgent move to bolster a team at the bottom of the Football League with just 10 games remaining. Within hours of signing a loan deal until the end of the season, he made his Argyle first team debut, playing on the left side of midfield in a goalless draw against Bradford City. Bryan played in all 10 remaining games for Argyle and scored his debut Football League goal  a sumptuous strike in the 2-1 victory at Chesterfield, which went a long way towards securing Argyle's Football League safety. Returning to Ashton Gate, he continued to float on the fringes of the first team and scored his first City goal in a Football League Trophy win against Bristol Rovers in September 2013, in front of 17,888 at a packed Ashton Gate. Boosted by regular first team football, Bryan began to prosper in the en vogue wing-back position under the tutelage of Steve Cotterill at the promotion-chasing Robins.

Bryan went on to make 230 appearances for City, scoring 20 times across eight seasons, having barely cleared double figures in appearances before his loan to Argyle. The 24-year-old's stock continued to rise at the end of the August 2018 transfer window when he moved to newly-promoted Premier League side Fulham for a reported £6 million fee.

Held in high regard by many members of the Green Army in spite of the very short time he spent at the club on loan from Bristol City. An industrious left-winger who played with poise, skill and elegance, a perfect foil for his 'enigmatic' partner-in-crime Jason Banton. He scored his only goal for the club with a sublime right-footed shot curled into the top corner on an April Tuesday away win at Chesterfield. Scored a very similar goal after returning to Bristol City the next season - the winner a JPT derby against Rovers.

On a completely random note, Bryan's father is a heart surgeon at the Bristol Royal Infirmary.